Showing posts from August, 2022
Show all

Holding Stuff Down - Cargo Net for the Gladiator's Bed 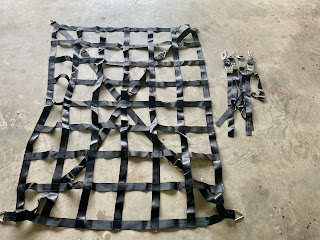 As mentioned before in this blog, one thing I'm still getting used to with the new Jeep is how little cargo space there is. We're going up to our cabin this coming weekend, and we're bringing two full-grown adults to accompany my wife and myself. Four people are a tight squeeze in the vehicle's cab, which means all of our combined gear, cooler, etc. that normally would live in the back seat area will have to ride in the truck's bed. Combined with highway, bumpy washboard dirt roads, and of course rock crawling... well, stuff can leave the bed on its own accord if not properly secured. To address this issue, I purchased a heavy-duty cargo net that I'll keep in the toolbox and use in instances like this upcoming weekend jaunt. The unit I purchased was a Mophorn 50"x66" heavy duty cargo net that came with four tied down straps and carabiners. It's probably too big for typical loads (e.g., coolers and such) but I erred on the side of too big, rather th
Post a Comment
Read more
More posts